Alas, this is horribly late, but as the old saying goes — better late than never. This post covers the episodes that premiered during the Monday-Sunday week of July 22nd to July 28th. That week on my cut-off position can be found Skins’ S07E04, Pure: Part 2. Quite a pity that Cassie’s (Hannah Murray) story came out weak and weird and very badly handled. She was my favorite in the early seasons of the show, but this episode did not use its full potential and didn’t do justice to Hannah Murray’s charm. Though those modeling photos of her we saw in the episode were simply breath-taking.

A drop of four positions for Under the Dome, not because it was a bad episode but because its improvement was the smallest in comparison to the other episodes I watched. In fact, this episode was better than last week’s for Under the Dome, but most shows made a huge jump.  The missile hitting the Dome was a great plus here, and especially Joe and Norrie kissing while it happens and with no resulting seizures from the touching. Oh and there was Big Jim pushing Coggins’ (the priest) head against the Dome, which kills him due to his hearing aid in the ear that touches the Dome. If it wasn’t for this annoying  person called Junior and his story with Angie I think it would have been even better. The puzzles I’m most intrigued by are Barbie’s past and Joe and Norrie.

This might have been one of my favorites non-finale episodes of Suits. It was brilliant and witty and great in every aspect, until the ending came. While a frustrated Louis seeing Mike, who had just agreed to be on his team, and Harvey reuniting their team in his office might be fun to watch, it was the obvious choice and the most predictable move ever. This might be my own wishes interfering with my judgement, but I believe if the Mike/Louis partnership idea continued at least for one more episode, it would have been a better plot twist. Nothing to add beside this, a fantastic episode overall and I think Louis has never been greater than now but alas that ending was far from my liking.

If there’s one thing this episode wasn’t, it is six minutes.  While the idea of Linden still trying to save Seward just 12 hours before his execution sounds like something one would want to see, going back and forth on whether he actually killed his wife or not made the whole 40+ minutes painful to watch. The high-point of the episode was definitely the ending itself, Seward being hanged and Linden sitting there waiting for the execution to end (which felt like the longest execution I’ve seen on TV, though that might be because they usually involve faster methods). Overall, I do not feel this needed a full episode as it felt super slow and made me gag quite a lot — kind of like the execution itself was. But I did like that execution and Seward made the episode watchable, plus it was better than the previous episode so two spots up for The Killing.

One spot up for the great pile of chaos that is True Blood nowadays. There’s no way my short one-two paragraph reviews can cover up everything that happened in this episode, so we’ll go the short route of simply mentioning the best points and what made the episode so good.  Eric and Norra escaping the compound; Terry knowing about his death — so hyped to find out about this; Sara’s scene when she finds Burrell dead; Pam’s bromance with the therapist; Norra’s death. If there’s one thing that made True Blood step up the ladder this week it’s Norra’s noble death, accompanied with flashbacks from Eric’s early days of Vampirehood, and lots of prayers, requests, and tears, that fortunately do not help Norra at all. Yes, fortunately, I am glad she’s out of the picture.

I take back everything I said about the ending from the previous week. It is true what they say, do not judge a book by its cover, and in this case definitely do not judge a show by a single episode. Last week ended in the worst and weirdest fashion, but all of that was forgotten because the starting scene for this week was as fantastic as it can be. Dexter and Debra sitting down in front of Dr. Vogel and discussing the fact that Debra tried to kill Dexter even if that meant she’ll die as well. Yet, as Vogel points out, she did go back to save him from the drowning car. According to her, this was Debra hitting rock bottom and as soon as that happened, she became ready to accept Dexter as he is, hence the saving. At first Dexter has lost all trust in Deb and refuses to accept her back, but once Vogel has been kidnapped by a serial killer, Yates, they’re united once again. Not only do they reunite, they become a team, sort of, and eventually the episode ends in the calmest, strongest, most psycho-moment so far. Dex, Deb, and Vogel sitting on Dexter’s Yacht after throwing Yates’ body in the water. All that’s missing is Harrison, right? 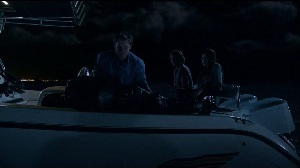 P.S. Masuka and his daughter are a great addition to the show, but the fact that we’re nearing the end of Dexter’s days and everyone is focused on his story, kinda puts a shadow over Masuka’s story.